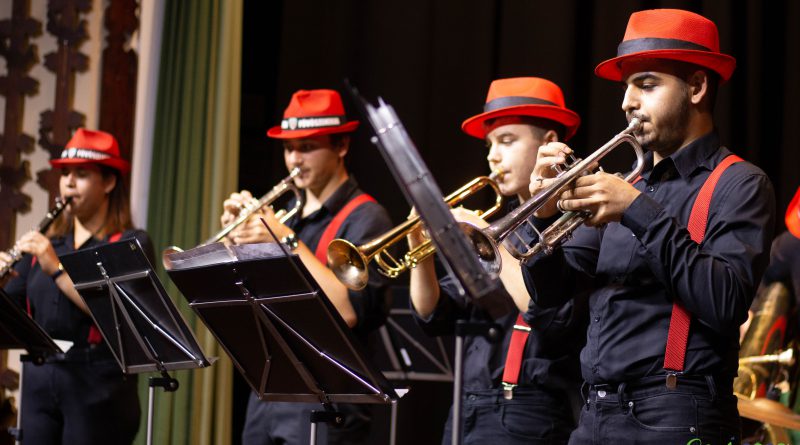 The opening ceremony of CEOI 2020 began with a stunning moment: the Nagykanizsai Fúvószenekar appeared on the stage playing a classical piece of Queen, Bohemian Rhapsody.

Then, Dr. György Beck, the Chairman of Neumann Társaság – NJSZT greeted the participants and the guests with welcoming words. It was followed by Brass Orchestra’s nostalgic Hits Cavalcade, which amazed the audience. They played classical pieces from different cultures and eras.

The Mayor of Nagykanizsa, Balogh László emphasized in his speech: the olympiad is the beginning of a new era. He cited G. B. Shaw’s memorable thoughts about the importance of reasonability.

László Jobbágy (Managing Director at Digitális Jólét Nonprofit Kft. ), in the focus of his speech, mentioned that the contestants would change our world having special power and knowledge.

Premier Táncklub performed Grease and Bring it on, Girls choreographies, and the contestants were introduced by countries between their two appearances. The rope skipping team’s production by Szan-Dia FWK was a real „Miracle on the stage.”

Afterwards, Patrik Biró (Technical Leader of Klebersberg Institution Maintenance in Nagykanizsa) pointed out: „This olympiad is the celebration of talents.” The Headmaster of Batthyány Lajos Gimnázium – Nagykanizsa, Sándor Dénes, mainly spoke about the history and traditions of the school and welcomed the competitors on behalf of the host institute.

Dr. András Benczúr, the President of the 27th Central-Europian Olympiad in Informatics, officially opened the event.